Mars is today what Earth will be tomorrow. 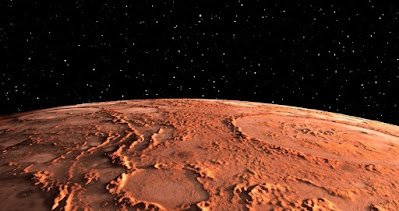 (English-speaking readers, please note: this article was written, in Portuguese, in November 2018, but not widely published. When it was written, the media only discussed the possibility of some form of life on Mars. Basically, whether or not there was water on the planet. Hence my focus on the existence of water and the possibility – in my opinion, almost a certainty - that there was a more advanced civilization than ours, when the Earth just “roasted”, uninhabitable, the Sun being much hotter than it is at present. As solar heating diminished, the Earth became habitable, giving rise to the evolution of a plethora of life forms; Mars, on the other hand, farther away from the heat source, became too cold, possibly requiring the existence of underground life, if permitted by its degree of technological development. When the text below was written, there was no coronavirus pandemic, with no new facts allowing for deductions or intuitions regarding possible “Martian” intent or necessity to occupy another planet - our Earth - much more comfortable than Mars. I am therefore preparing an article that will supplement the previous one, to be published in a few days). (02/11/2020)

Summarizing the present article: Mars seems to be, from all indications, the tomb of an advanced civilization, buried in the dust of millions of centuries.

With so many unoccupied lands on our planet, the current speculations about migrations of human beings, to live on Mars is a mere childish science fiction. Such concerns will perhaps make sense in a thousand years from now. What we need now is to take care of our planet in terms of deforestation, ozone depletion and pollution, rational sharing of fresh water, and an intelligent and non-aggressive restraint in the disorderly growth of the population, generating poverty and mass migrations, with sufferings of all kinds, both leaving and arrival of immigrants, fugitives, to other countries.

Eventually if the Red Planet — as I have already said — managed to survive in the hostile, cold and oxygen-free environment with advanced technology, this occurred by means of tremendously reducing its population, living beneath the ground, which would explain the existence of flying saucers — provided their existence is proven. Personally, I think they do, in spite of not having seen any. And if they exist — progressing in the deduction — it would be quite logical, normal, that they were watching us as future habitats, a real wonder compared to the cold and hostile planet Mars.

I have never been very interested in flying saucers, but when I read something relating to this issue, I am impressed by the constant questioning of those who affirm their existence: — Why does UFO’s crew only spy on us, avoiding contact? What is their interest? Do they plan something bad?

I shall leave the item flying saucers since the focus of this text is to suggest — with apologies for the repetitions — that Mars, when less cold, with a climate similar to our current one, had enough time for the growth of a civilization which has either completely extinguished — leaving its ruins covered by tons of dust — or managed with great effort to survive with a small population  living underground, warmed by dangerous nuclear technology and, perhaps, with high hopes to colonize its nearest planet, in this case Earth.

Obviously, I prefer my hypothesis to be wrong since we already have too much confusion on our planet, led by dumb rulers or very smart leaders, of all calibers, who cannot — despite the presence of the UN — prevent half-witted people, shielded by unlimited "sovereignty", from doing what they feel on a whim.

The present considerations came to my mind with the news that Nasa's space module InSight landed successfully on Mars’ surface on 26/11/2018, attempting to study the interior of the planet.

I venture, without fear of ridicule, to believe that Mars today corresponds to Earth in the distant future falling prey to environmental insanities and a possible nuclear war, triggered by mere accident. The nuclear strategy of immediate response "- to counter-attack before verifying that the first attack was not accidental - on a planet, in this case ours, increasingly filled with nuclear weapons, is an invite to chaos.

The above and below considerations in this text are based on the assumptions, which may only be correct, that the  Sun — in our solar system — was, in its "beginning", much more voluminous and hot. Since the fuel of this gigantic fireball has been progressively depleted without replacement, there has been a long period in the past, when Earth was too hot, therefore uninhabitable, but Mars — farther from the Sun — had a pleasant temperature like the Earth, today.

Astronomers claim that every second more than 4 million tons of solar matter is converted into energy. This means a constant cooling of the "oven". One day, the Sun will be extinguished — unanimous statement of Astronomy — by exhaustion, after a sudden growth which will burn our planet. It may well be the "swan song” of our star.

Again, the sun at its commencement was warmer than it is now. So hot that our planet could not host life. Meanwhile Mars at that time could thrive in growing civilization by being farther away from the sun. After this long phase, with the sun gradually cooling down, Earth became livable and Mars, farther away from the sun, became too cold, being able perhaps and rather hardly, to harbor an underground life of intelligent beings with cutting edge technology.

I have no doubt that life sprouts in every celestial body of sufficient size for its long duration, as long as it receives light, adequate heat, and contains water. This happened to Mars, before the Earth, too hot to make life possible. Mars and Earth are like sister planets, but Mars was born first. When the Earth was still inhabited by dinosaurs, or not even that, Mars was perhaps a kind of Middle Age.

Since all living beings — without no exception — are born with two tendencies which have always impressed me by the consistency — the instinct for self-preservation and propagation — that is, food and sex — the Martian "bugs" also slowly evolved from bacteria to intelligent, human-like beings. From mutation to mutation — by genetic accident and also by pressure from the hostile environment — Martians invented writing, discovered mathematics and achieved a deep knowledge of matter.

It seems to me to be logical to conclude that on Mars there has also been an Albert Einstein, or theorist of the same level. Thinking, thinking and thinking, the "Martian Einstein", equally mystified, digging into his speculations, ended up bumping into the mystery of the almost invisible particles of matter, only visible with an electron microscope. Meanwhile, on Earth, we did not even know that our thinking organ was the brain, neither the heart, nor the liver.

Since Martians are an intelligent species, such as man, the two primordial impulses, referred to above — self-preservation and propagation of the species — with the constant stimulus of a struggle for supremacy, Martian "governments" must have clashed into a conflict that ended up destroying vegetation and the environment. Let us remember that our oxygen originates from plants. Without these, only elementary and rare life could exist.

Finalizing, future excavations or prospections on Mars, if anything "interesting” is found, will not be just water, or extinct organic matters of microbial life. They will find it cement construction, or equivalent material, buried.  Remains of an extinct civilization, or — even more difficult — evidence of a living and tiny "underground civilization", intelligent and maybe peaceful as a result of being too advanced.

I believe that the more advanced any civilization is, the more understanding and ethical it becomes, which would explain any attempt of  Martians to dominate  Earth, taking advantage of its great technological advance. If they were able to build flying saucers, this would be proof of their superiority, proven by aeronautics.

Do not come to me with the argument that not always technological or scientific advance tends towards the good because the Nazi science was extremely cruel. In fact, "Nazi science" was nothing more than a demagogic blunder seeking to support the regime with a fanciful scientific aura.

Let's wait for prospecting on Mars.