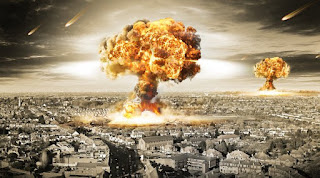 I believe so. In my opinion, this likely to have occurred, at least on a small scale.

It should be clarified that I am only referring to average, statistical intelligence (not geniuses or halfwits) and that which is natural and has nothing to do with level of learning. A person with a university education may be less “organically” intelligent than someone who has not completed elementary school or even someone who is illiterate. In popular language, some are born smarter, quicker or more inventive than others.

Among well-educated people, the level of intelligence is variable. As someone once said, referring to an enemy, “he acquired more knowledge than his intelligence allowed”.

Besides deaths, injuries, chaos and destruction on a large scale, it can be presumed that, in each country, wars bring about a genetic, mental decline in subsequent generations, given that in such conflicts the “survival of the least fit” occurs, together with the “extinction of the fittest” – going against the theory of evolution put forward by Charles Darwin. This is just one more argument against the stupidity of wars. Fortunately, to date, women have not participated en masse in combats. They have thus conserved the best genes of their respective nations.

In wars, it is exactly the youngest and healthiest, in body and mind, who are called up and approved for military service, and who die first in combat. They die, whereas the young men rejected by armies continue to produce children.

Being merely curious, with an inclination to investigate possible biological ties of the cause and effect type in social issues – in this case, between the death of millions of young soldiers and the current mental retardment of human beings – I ask myself whether periodic wars, eliminating the best portion (healthy young men) of the population, explain why humanity has not improved. Or worsened, in average mental and moral terms, despite its impressive technological advances. It should be noted that scientific, technological and philosophical inventions are relatively rare, produced by a microscopic fraction of humanity. In this text, I solely wish to discuss a global, statistical hypothesis, recognizing, of course, that many young people who are unfit for fighting in wars may be exceptionally intelligent. However, I am not going to discuss exceptions.

How did the idea arise of relating regular and frequent wars to a low level of evolution, or no evolution, in the quality of human beings? I will explain below.

After reading hundreds of the writings of Greek philosophers – Socrates, Plato, Aristotle and even pre-Socratic philosophers - in three languages, I keep asking myself the following: Socrates, for example, was likely born in 470 BC, in other words, around 2,500 years ago. What he said – and his followers wrote – regarding ethics, politics and human beings has not been supplanted by current “thinkers”, even after so many centuries.

Modern writers seem to be more concerned with phrases destined for effect, with a view to ensuring successful sales, than depth and striving for truth. In politics it is even worse. One only needs to compare the improvised speeches of the presidents of nations over the last hundred years, including the heads of state of some of the richest countries. With regard to speeches that are read, at the highest level, it is known that they are commonly written by so-called ghostwriters. Little or no progress in these areas in 2,500 years. Maybe even a regression, despite our impressive technical advances, the product of rare innovators.

In spite of the availability of so much reading matter, with the invention of the printing press, computers and cell phones, as well as the free and instantaneous availability of information, modern man continues to lie, cheat, kill and rob in an uninhibited manner. With one aggravating factor: after the aforementioned philosophers, three principal religions arose which, being monotheistic, should drive humanity in the direction of uniting the human species.

However, it got worse. The carnage only increased: the Crusades, the Thirty Years’ War, the Hundred Years’ War, the Napoleonic Wars, The Russian Civil War, the American Civil War, the Dungan Revolt (in China), the Tamerlane “Attacks”, the First World War, the Second World War, the Korean War, the Vietnam War, the Gulf Wars, the Syrian “Civil” War, the Islamic State, fighting between Israelis and Palestinians, etc. All this without even counting a possible nuclear conflict if Kim Jong-un and Trump continue to threaten one another, embrace and then threaten once again. One push of the button, even accidentally, and chaos will ensue.

I spoke of an “accidental push” because when Jimmy Carter was president, one of his suits was sent to the laundry with a “cell phone” or equivalent device that had been carelessly left in one of the jacket pockets which, when activated, would fire missiles with atomic warheads against Russia. To counter this, Russia would use its “immediate response” system, launching atomic missiles against the USA, London and other European capitals, members of NATO. Fortunately, ignorant of the danger, no young employee of the laundry tried to “test” the buttons of the enigmatic “toy”. Could it be a new “smartphone”, with games?

I like to remember that sometimes good is to be found in evil and vice versa. At the time of the Cold War, if the USA and the Soviet Union were not nuclear powers, a Third World War would have already occurred. Following the defeat of Germany, Stalin had divisions available for territorial conquest of a large part of Europe.

With a view to avoiding wars, it is necessary to prohibit them; however, in order to prohibit them, it is necessary for nations to be aware of a need to cede part of their sovereignty to a central agency, a type of “world police”, or “amplified UN”, authorized to “cut back” the excesses of the capricious and abusive sovereignty of certain nations dominated by generally dictatorial governments, where the people are afraid to protest against their leaders. Such “abuses of sovereignty” occur in strong, well-armed nations, because weaker ones know, realistically, that their own sovereignty is only theoretical, if not maintained by a “guard dog” that says: “Hands off this one!”.

Unfortunately, there is a lack of a recognized, reliable and determined world leader, who can convince the majority of nations that there is a need to act while there is still time.

Delinquent travesties of heads of state wish to continue doing whatever they want – causing mass migrations and thus disorganizing other countries, incapable of suddenly accepting millions of refugees – when this could have been avoided if there were a global organization with the power of preventively “nipping out” and compulsorily retiring half-crazy politicians intoxicated with limitless power. If Hitler had been forcibly interned in the 1930s, the Second World War would not have existed. Unless another lunatic appeared with the same obsession, who would have also been “removed” from power.

The allegation that a “world government” would inevitable be despotic, led by bankers, is a deceptive, prophetic lie at the service of rogues who adore the “status quo”. Of course, such malicious “bankers” may currently exist; however, they are basically no more than smart cretins (without any contradiction in this description) with a mania for greatness.

In setting up this necessary advance in human co-existence, all countries would put forward their opinions and pay particular attention to preventing this regulation of sovereignty from becoming transformed into an instrument of oppression at the service of a small group of financiers. With current knowledge of governance techniques, it is already possible to polish the sovereignty of states, simply limiting abuses. However, there is a lack of someone with the courage and greatness to do this.

One must agree that it is not really a complicated matter. How many professors of International Law are there in the world? Thousands of competent ones, of course, but almost all handcuffed by the fear of being criticized, hated or dismissed from their posts.

It is not necessary for an alien force to threaten our planet in order to unite it and, once united, become strengthened and save its inhabitants. Millions of them, crossing deserts on foot, dying from asphyxiation inside containers, drowning in the sea or fleeing from soldiers seeking to amputate their arms with machetes.

Enough of indifference and timidity.

This article was translated from Portuguese by John Upson
(e mail john@wetranslate.com.br)