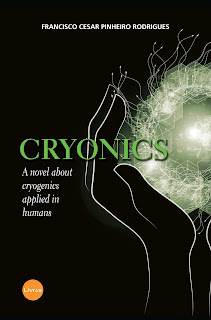 In 2005 I published a novel — very little divulged — which I baptized with the above title, an adaptation of the English word "cryonics", invented by North Americans. It means the technique of freezing human beings right after death — before irreversible brain damage occurs — with the hope to be unfrozen some years later when the diseases now incurable, are no longer. The presumption undeniably, is that the medicine of the future will be much more advanced than that of the present. A technique currently incipient and groping, but when it finally works out will be the dawning of a new era. There is nothing more revolutionary", although without any foreseeable date for success.

Please do not confuse the word "cryonics" with "cryogenics", a broader branch of physics which studies the production of extremely low temperatures and their effects on matter in general, including living beings.

Reiterating, "cryonics" refers solely to the freezing of people with the purpose of "waking them up" years later.

— Excuse me ?! Resurrect them?!" — those who cling deeply to religious thinking ask themselves. — "And what happens to the soul? Will it remain frozen in the “corpse” or will it keep on wandering around until it is summoned back? ”Jokes are abound. For the time being with some justification, but time will show that the future will surprise us. Obstacles deemed much more complex have already been overcome by human resourcefulness.

The freezing process would be a kind of “pause” in the movie recorded on DVD. To continue watching just push the button on the remote control. The film does not "deteriorate" with the pause. According to what I read, the atoms themselves — normally so restless at normal temperature, filmed under the electronic microscope — are almost immobilized when the temperature is -196 C. This is the temperature of the liquid nitrogen in which the "dead", or "patients", in the terminology of cryonics enthusiasts, are kept. A kind of icy "coma 2”.

The practical interest in such an ambitious feat, "to resuscitate" a "dead" person — thereof legally considered because the heart and lungs have stopped functioning — obviously arose in human beings who still hoped to live many years, but were informed, by honest and competent doctors, that their illness is mortal, incurable and with an imminent death.

Even if the patient knows that laboratories are striving to cure his disease, the honest and realistic doctor informs the anguished client that still in his case if news of a significantscientific breakthrough eventually emerges there will not be enough time for the manufacturing of the medication, rigorous efficacy tests and authorisation for its commercialisation. Waiting for a “scientific miracle and pharmaceutical ” will be guaranteed death.

When this is the situation, the patient, imaginative and clinging to life, thinks likewise: — "Since I am going to die in a few weeks, or months, why not take the risk of freezing myself at -196° C and wait for better times when my illness is equivalent to a cold? I will not be killed before my due time because that would be murder. The moment I die from natural causes instead of my body starting the decomposition process, the technique will start a "treatment" to prevent rotting. Only when my heart spontaneously stops beating and I am unconscious will the paramedics on standby quickly extract my blood, replacing it with a liquid — a kind of glycerine — which will only be replaced by real blood when I am thawed out".

And the "condemned" goes on musing: — When I come out of the "cold coma" in a few years time I will receive a blood transfusion; my heart will be electrically stimulated to beat, oxygen will invade my lungs, and I will be able, who knows to live again. If the process does not work, I will remain dead, like the rest of humanity, totally unaware of the failure. Just the old and wellknown eternal sleep. This conjecture is more comforting than knowing - with absolute certainty — that in a few days, or months, I will really die, buried or reduced to ashes. By freezing, I will have some chance, above zero percent, of "coming back" — because science and technology do not stop evolving. And what do I have to lose by freezing myself? Only the money I gave to the company that kept me immersed in liquid nitrogen. What use is money to any dead person?

In my novel "Cryonics"— which by no means is a science fiction book— I cast two characters: a shrewd former Brazilian banker, condemned for murdering his wife and suffering from an incurable cancer, and his brother, a more sensible retired judge, who tries to convince the sick man not to get into a probable commercial trap. He finds this story of coming back to life after years or decades rather hopeless but in the course of conversations with his brother he begins to admit its possibility at some extent. He is emotionally stimulated in this scientific tolerance because he sees in it a solution to a sentimental secret that he has never revealed to anyone.

The novel develops in the day-to-day waiting for death, the ex-banker telling his brother about the unfolding of his life, the memory of the women he "met", in the biblical or platonic sense — the financier was a womanizer who really loved, albeit temporarily, each one of them - recording the dialogues on a tape recorder. He does this because he hopes that his jurist brother will use this material to write a book that he, the sick man, will continue to write after his return to life. In "volume 2" he will be able to tell in more detail what he personally saw at the end of the so-called "tunnel of light", so described by people who have suffered the experience of "near death", or even died for a few minutes, being resuscitated by shocks to the heart.

To write this novel I spent a lot of time reading the topics of science and philosophy related to such a peculiar situation. I took the opportunity to bring up, in the dialogues, the professional experience of the retired brother, creating a parallel plot to the scientific aspect, thus avoiding the monotony of conversations revolving around a single technical subject.

Life is brief. Generally speaking, the first twenty years serve only for weaning, literacy and elementary knowledge of the world around us. After twenty comes the phase of the struggle for life, the sexual dispute, competition, the fight for status. From forty to sixty the struggle of the merely useful "camel" continues. After sixty, the "gas" goes away. Generally speaking, in this phase, most people, looking back, do not consider themselves "winners". The summary eventually is: "They were born, suckled, ate, drank, fornicated, worked — or did not always have this opportunity — and the focus of life became the fight against cholesterol, diabetes or hunger, high blood pressure and similar concerns.

There are however, a few thousand individuals — among the planet's seven billion inhabitants — who are really interested in truly knowing our habitat, ourselves and the fascinating and mysterious cosmos. These are people, generally intelligent — or at least unusually curious - who yearn to form a synthesis of the known world and give a leap into the unknown, seeking explanations for all phenomena.

For those really interested in delving deeply into the understanding of living, and non-living beings, the time span of fully lucid life is disappointing. It is a waste that people akin to Einstein for example, and hundreds of other scientists — remarkable in intelligence and character — have so little useful time. Hence the interest in creating a proper freezing technique that allows scientists and thinkers, especially ingenious ones, to "pause" their lives when their brains begin to decline seriously, knowing that after a "sleep" of ten or twenty years,they will be able to "wake up" repair their brains, add new neurons using stem cells, and continue with their research.

Moreover, in the course of future decades, and centuries, man will "need" to send astronauts for space exploration far beyond the moon. Such journeys will consume years of life. With the freezing technique, by then mastered, the astronaut will be able to "sleep" for ten, twenty, thirty or fifty years, perhaps flying with speed close to that of light without aging, only "waking up" when the spaceship computer says it is time to "wake up".

I think my hopeful advocacy in the programmatic content of the book referred to is justified. I want to encourage smart and intelligent people to think about the topic.

To read the book in e-Book version please look it up on the internet.